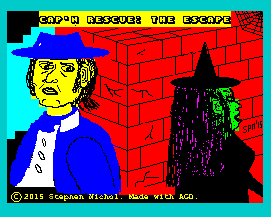 I was recently looking at the loading screen for CR2: The Escape, and was quite unhappy with the black and white monochrome loading screen that I drew myself. It made me feel a bit lazy and - although a lot of people use instant loading now, I wanted to make these games as much like they had been made and distributed in the years 1982 - 1993 as possible.

Most ZX Spectrum games had loading screens, to give the gamer something to look at as they waited around three and a half minutes for their tape to load (if it worked first time around).

After some experimentation I realised how to work with the Spectrum's quirky colour-clash problems in order to have more colour in my loading screens. 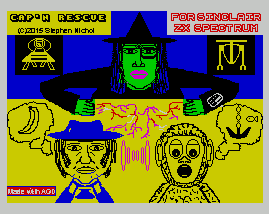 After I updated the "Cap'n Rescue: The Escape" loading screen, I decided to go back and do the first game screen as well. This then led to me updating the in-game graphics as well, so that both original game and sequel have the same style of graphics. I had around 1K to play around with in AGD, so it was quite feasible to make the changes.

So it is, that I now present to you Cap'n Rescue version 3.0, downloadable from the Loading Screech homepage - enjoy!

Tip: If you want to see the loading screens in an emulator check out the tape loading options,there's quite often a 'real time' option you can choose, though - be prepared for a dial-up style of noise coming

out of your PC or other device if you do!